As I have commented in previous posts of this blog (Good Clostridia in our gut March 21st, 2015; Bacteria controlling what we eat October 12th, 2014; Bacteria of breast milk February 3rd, 2013), it becomes increasingly clear the importance of our microbiota, id est, all the micro-organisms, especially bacteria, with which we live.

The human microbiota varies from one individual to another, in relation to diet, age and the own genetic and phenotypic characteristics. Moreover, since we do not live isolated, there is also the influence of the environment, and of other people with we live, including our pets, dogs and others. They all have also their own microbiota.

The human body is home to many different microorganisms: bacteria (and archaea), fungi and viruses, that live on the skin, in the gut and in several other places in the body (Figure 1). While many of these microbes are beneficial to their human host, we know little about most of them. Early research focused on the comparison of the microorganisms found in healthy individuals with those found in people suffering from a particular disease. More recently, researchers have been interested in the more general issues, such as understanding how the microbiota is established and knowing the causes of the similarities and differences between the microbiota of different individuals.

Now we know that communities of microorganisms that are found in the gut of genetically related people tend to be more similar than those of people who are not related. Moreover, microbial communities found in the gut of unrelated adults living in the same household are more similar than those of unrelated adults living in different households (Yatsunenko et al 2012). However, these studies have focused on the intestine, and little is known about the effect of the relationship, cohabitation and age in microbiota of other parts of the body, such as skin.

The skin is an ecosystem of about 1.8 m2 of various habitats, with folds, invaginations and specialized niches that hold many types of microorganisms. The main function of the skin is to act as a physical barrier, protecting the body from potential attacks by foreign organisms or toxic substances. Being also the interface with the external environment, skin is colonized by microorganisms, including bacteria, fungi, viruses and mites (Figure 2). On its surface there are proteobacteria, propionibacteria, staphylococci and some fungi such as Malassezia (an unicellular basidiomycetous). Mites such as Demodex folliculorum live around the hair follicles. Many of these microorganisms are harmless and often they provide vital functions that the human genome has not acquired by evolution. The symbiotic microorganisms protect human from other pathogenic or harmful microbes. (Grice & Segre 2011). 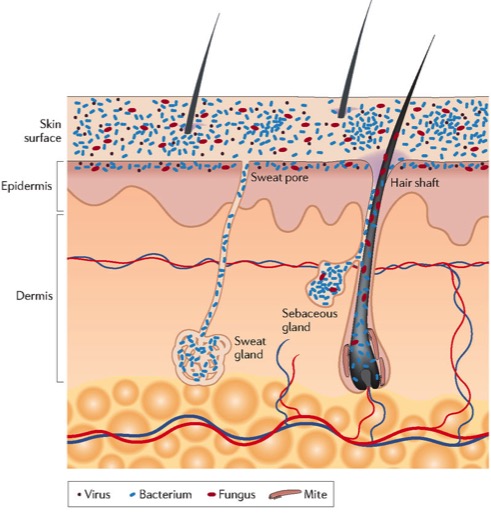 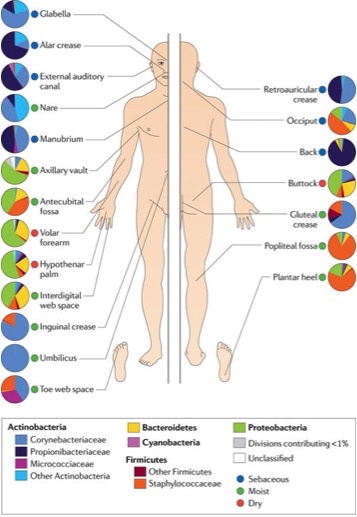 The skin is a complex network (structural, hormonal, nervous, immune and microbial) and in this sense it has been proven that the resident microbiota collaborates with the immune system, especially in the repair of wounds (Figure 4). As we see, particularly the lipopotheicoic acid (LTA), compound of the bacterial cell wall, can be released by Staphylococcus epidermidis and stimulates Toll-like receptors TLR2, which induce the production of antimicrobial peptides, and also stimulate epidermal keratinocytes via TLR3, which trigger the inflammation with production of interleukin and attracting leukocytes (Heath & Carbone 2013). All this to ensure the homeostatic protection and the defence against the potential pathogens. More information in the review of Belkaid & Segre (2014).

Figure 4. Contribution of the resident microbiota to the immunity and wound repair (Heath & Carbone 2013)

At home we share microbiota, and with the dog

As mentioned earlier, environment influences the microbiota of an individual, and therefore, individuals who live together tend to share some of the microbiota. Indeed, it was recently studied by Song et al (2013), with 159 people and 36 dogs from 60 families (couples with children and / or dogs). They study the microbiota of gut, tongue and skin. DNA was extracted from a total of 1076 samples, amplifying the V2 region of the 16S rRNA gene with specific primers, and then it was proceeded to multiplex sequencing of high performance (High-Throughput Sequencing) with an Illumina GA IIx equipment. Some 58 million sequences were obtained, with an average of 54,000 per sample, and they were analysed comparing with databases to find out what kind of bacteria and in what proportions.

The results were that the microbial communities were more similar to each other in individuals who live together, especially for the skin, rather than the bowel or the tongue. This was true for all comparisons, including pairs of human and dog-human pairs. As shown in Figure 5, the number of bacterial types shared between different parts was greater (front, palms and finger pulps dog) of the skin of humans and their own dog (blue bars) than the human with dogs of other families (red bars), or dogs with people without dogs (green bars). We also see that the number of shared bacterial types is much lower when compared faecal samples or the tongue (Song et al 2013).

Figure 5. Numbers of bacterial phylotypes (phylogenetic types) shared between adults and their dogs (blue), adults with other dogs (red) and adults who do not have dogs with dogs. There are compared (dog-human) fronts, hands, legs pulps, and also faecal samples (stool) and tongues. Significance of being different: *p<0.05, **p<0.001 (Song et al 2013)

This suggests that humans probably take a lot of microorganisms on the skin by direct contact with the environment and that humans tend to share more microbes with individuals who are in frequent contact, including their pets. Song et al. (2013) also found that, unlike what happens in the gut, microbial communities in the skin and tongue of infants and children were relatively similar to those of adults. Overall, these findings suggest that microbial communities found in the intestine change with age in a way that differs significantly from those found in the skin and tongue.

Although is not the main reason for this post, briefly I can say that the overall intestinal microbiota of dogs is not very different from humans in numbers (1011 per gram) and diversity, although with a higher proportion of Gram-positive (approx. 60% clostridial, 12% lactobacilli, 3% bifidobacteria and 3% corynebacteria) in dogs, and less Gram-negative (2% Bacteroides, 2% proteobacteria) (García-Mazcorro Minamoto & 2013).

Although the relationship with the microbiota has not fully been demonstrated, some evidence of the benefits of having a dog has been shown recently, and for the physical aspects, not just for the psychological ones. Swedish researchers (Fall et al 2015) have carried out a study of all new-borns (1 million) in Sweden since 2001 until 2010, counting those suffering asthma at age 6. As the Swedes also have registered all dogs since 2001, these researchers were able to link the presence of dogs at home during the first year of the baby with the onset of asthma or no in children, and have come to the conclusion that children have a lower risk of asthma (50% less) if they have grown in the presence of a dog.

Similar results were obtained for children raised on farms or in rural environments, and thus having contact with other animals. All this would agree with the “hygiene hypothesis”, according to which the lower incidence of infections in Western countries, especially in urban people, would be the cause for increased allergic and autoimmune diseases (Okada et al 2010). In line with the hypothesis, it is believed that the human immune system benefits from living with dogs or other animals due to the sharing of the microbiota. However, in these Swede children living with dogs and having less risk of asthma there was detected a slight risk of pneumococcal disease. This links to the aforementioned hypothesis: more infections and fewer allergies (Steward 2015), but with the advantage that infections are easily treated or prevented with vaccines.